Friday 2/11: Birmingham, Moundville and then south to Meridian MS

Started out looking for the location of Karen’s Uncle Bob and Aunt May’s Avenue Deli which Karen remembers from visits in the 50’s with them. Along the way to a part of the city edge where Karen had memory of a golf course, she began to recognize places and names including the village, Mountain Brook. 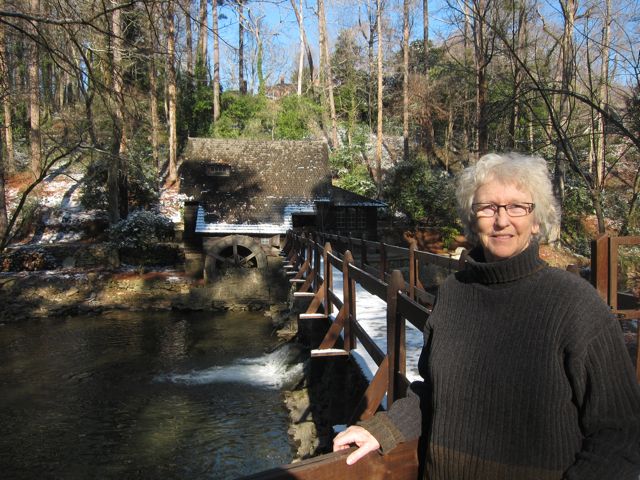 Then we came on the Old Mill. Karen recalled a photo of her taken in front when she was a pre-teen. Here she is “several years” later back in front of this site.

Now on the hunt for the village center we wandered around this hilly area of very expensive homes built predominantly in the decades before the Depression. With  directional help from a grounds keeper we came to the village center. Though there is no deli, there is no doubt that the buildings are the right age and Karen has memories of the name of the street, Church St. and the appearance of the neighborhood. 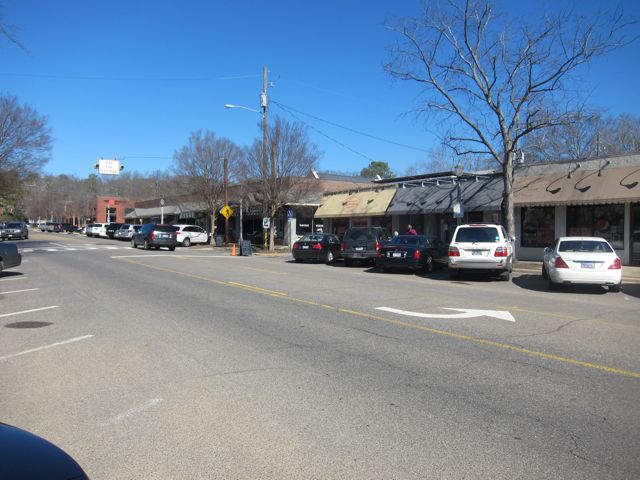 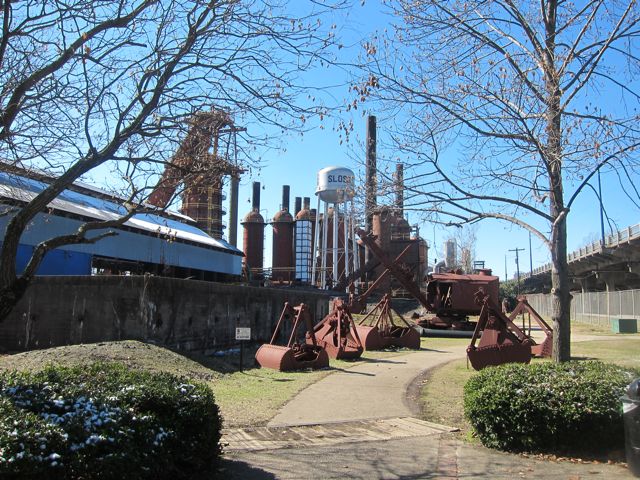 With this trip down memory lane under our belts, we went off to find an old industrial site, Sloss Furnaces National Historic Landmark. Birmingham used to be known as the “Pittsburgh of the South” for all of its iron and steel production. (Karen remembers the red sky of the city at night and from the top of the hill where the 55 foot tall statue of Vulcan stands. Just as Pittsburgh no longer makes steel, neither does Birmingham. But, instead of scrapping all of the plants, Sloss Furnace was turned into an National Historic industrial park. 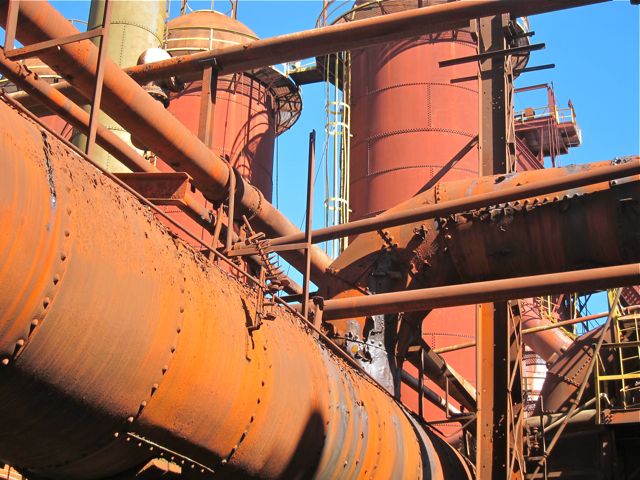 This is a rare opportunity to visit such a large facility and get some sense of the scale and grit of these operations. Sheeler would have been delighted.

The organization of the self-guided tour is not great and the audio narration soemwhat disjointed. Nevertheless this was an interesting stop.

We then went off to the Birmingham Civil Rights Institute situated across the street from the 16th St, Baptist Church site of a terrorist bombing in 1963 by the Ku Klux Klan that resulted in the deaths of four little girls. Karen visited the Institute while I spent time on the phone with clients.  The institute provides a moving history of African Americans in Birmingham (steel, railroads) as well as the struggle for civil rights there.  It is both a museum of our national history as well as a museum of the history of a single city.  The displays including dioramas and video that capture the times.  Rev. Fred Shuttlesworth, a key figure in Birmingham’s civil rights history, returned to live in the city to this day.  His story is highlighted in the museum and, judging from the docent Karen heard speaking with Birmingham school children at the institute for a field trip, it is clear that the institute is a place of living history.  The docent, a woman in her sixties was one of the children that filled the jails of Bull Connor. 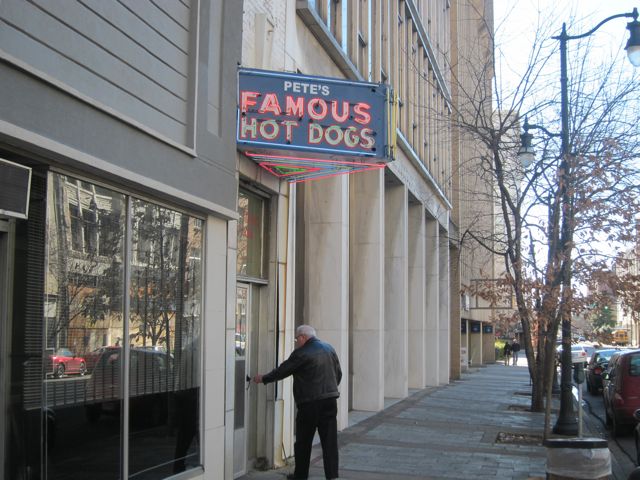 Before leaving Birmingham we drove around the downtown business district. Like almost every downtown originally built on 19th and first half 20th century wealth, it is a fairly moribund collection of handsome buildings now grossly underused. We did make a pilgrimage to Pete’s Famous Hotdogs. While chowing down our dogs, we got advice on a must see motorcycle museum and a story about a daughter making good in NYC at Parsons School of Design. 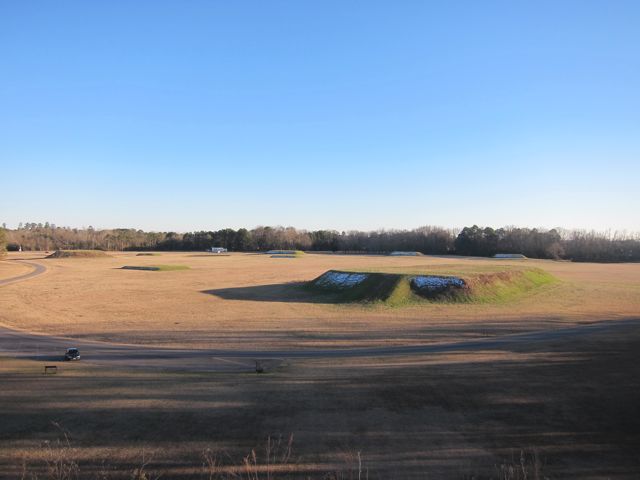 We left Birmingham by about 2pm and drove towards Tuscaloosa, AL to reach Moundville, site of Moundville Archaeological Park. This is a key site examining remains of the Mississippi Indians who occupied a large part of the Mississippi River Valley. We have had a sustained interest in American and Mezo-American Indians since Karen first visited Chaco Canyon in the mid ’80s. Having travelled to the Southwest numerous times and Mexico to visit Olmec, Mayan, and Aztec sites and museums, we have had it in the back of our minds that we would some day visit sites in the Eastern half of the US. Moundville is a very large site with a large number of mounds built for ceremonial purposes. The small museum has interesting artifacts and a rather strange holographic program introducing research into the Mississippian’s belief systems. 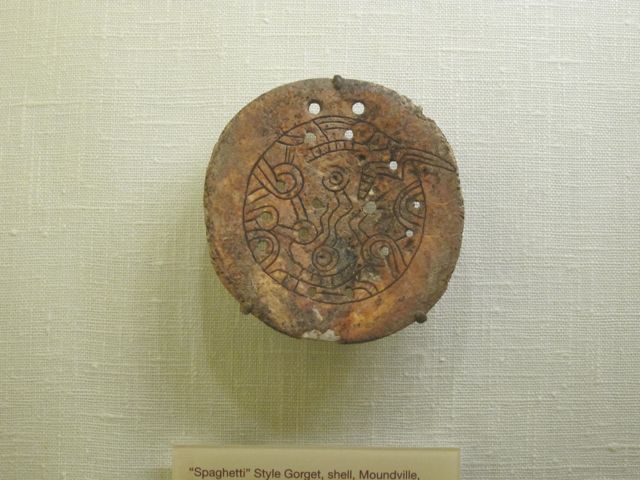 One Response to Friday 2/11: Birmingham, Moundville and then south to Meridian MS