Refreshed by six hours of real sleep after the sixteen hours upright in the plane, we were off to adventures in Hong Kong. Jonathan drove Karen, Jesse, and me to the university. There was a quick bit of professorial keyboard pounding, though the older metaphor for the academic-bureaucratic life, “paper shuffling” could just as well applied in Jonathan’s office.

I noticed that Jonathan’s office suite mate’s desk was empty and the computer equipment not set up. Jonathan explained that his suite met is a serious tobacco user and works entirely at home since the university is nonsmoking. He acknowledged that he had selected this guy exactly for his addiction. This struck me as a good sign that Jonathan is a bit more practical in his office politics than I might have thought. 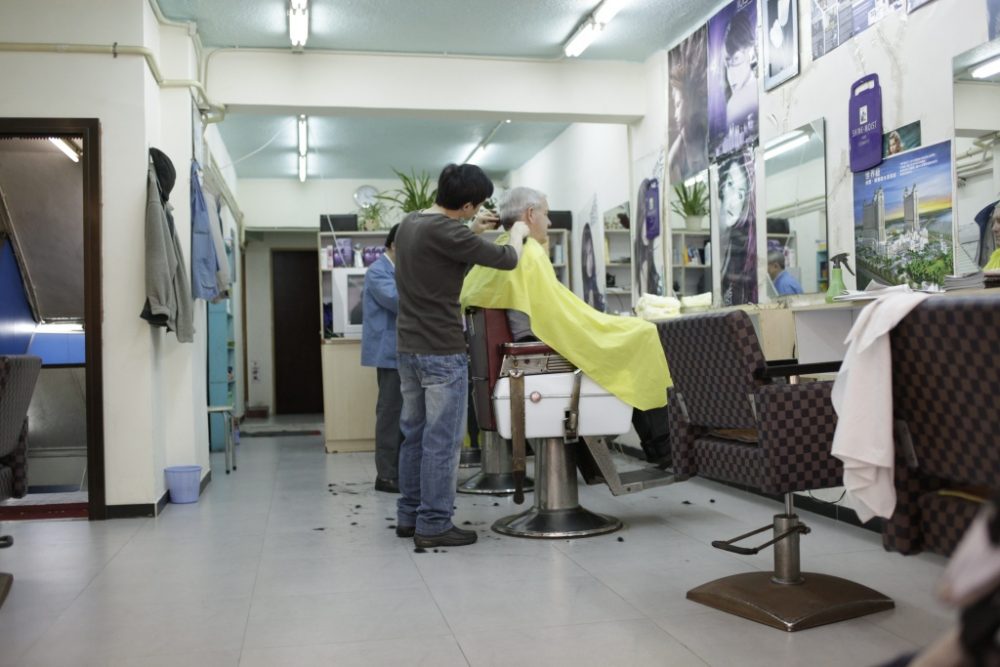 With the keyboard thumping out of the way we went off in search of a haircut for me. I am not sure that Jonathaan did not lead us in a very round about path, I did recognize some of the markets in Mong Kok, but eventually we found ourselves outside a building where Jonathan pointed up to the second floor and indicated that he had had a haircut up there given by a one of a gaggle of old Chinese guys. Up we went. Jesse, who had been asleep in the stroller for fifteen minutes did not even awake for his trip up the stairs carried by his father (who will not be doing that very much longer. Jesse is a burgeoning kid). I had the most detailed haircut. Nothing like the usual jobs I endure at the Super Cuts of my domestic world. 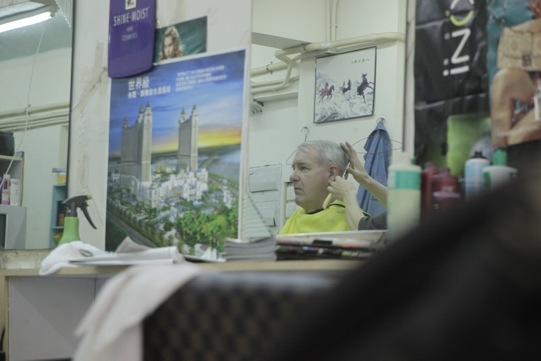 We then took a short walk to Langham Place, one of the innumerable huge malls that could gobble up even the most inveterate flaneur. This destination, he woke up for this stop, is home to Jesse’s miniature truck store. This expanding collection is fodder for his private story telling. Despite some urging by Jonathan to look around, he made his mind up very quickly and resolutely.

Following this purchase we made off to a Korean restaurant to meet up with Nan and Anna. The food was OK. The service inexorable. Jonathan suffered a near meltdown.

By this time I was ready for a nap. Karen accompanied Jonathan and Jesse for a tennis lesson. Never too early to start learning to hit balls. I am waiting for the chance to bat a few with Jesse. 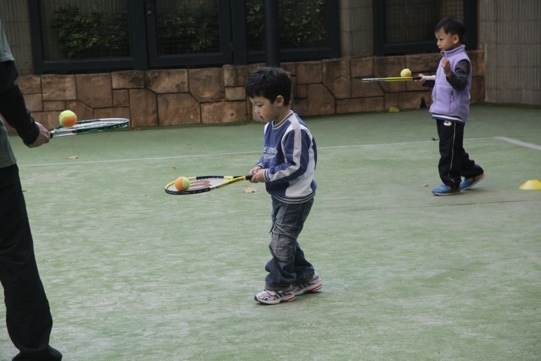 After my nap, the kids got fed and the adults were of to a night on the town. We’re returned to a beer hall, Fatts, in Mong Kok that we had visited on earlier visits. It features beer of course and the stalest peanuts ever served. The ambience was right and the company congenial. What’s not to like?

Dinner was found in the Chungking Mansion at the Sher-e Punjab restaurant on the second floor. We ate in the corridor with construction of a nearby stall underway. The food was very good. Spicy and definitely not served up for the watered down tourist palate, or even Central Sq. Cambridge. 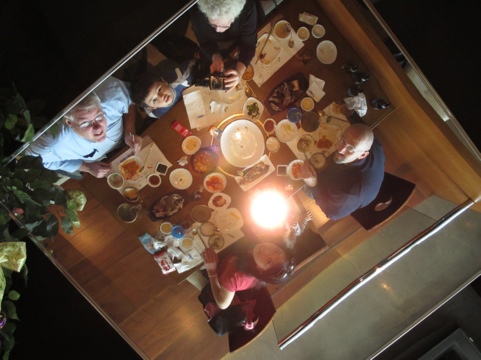 Posted in News | Comments Off on Hong Kong – Day One

During the first couple hours of this 16 hour flight I watched The French Connection. This is probably the fourth or fifth time I have watched this movie, though not perhaps more recently than five years ago. The movie really stands up.

One small revelation is that my recent lust for a fedora (thanks to that all around maven of the hip, David Drake) has been replaced by the need to get a hat like Popeye’s (not the spinach eater). 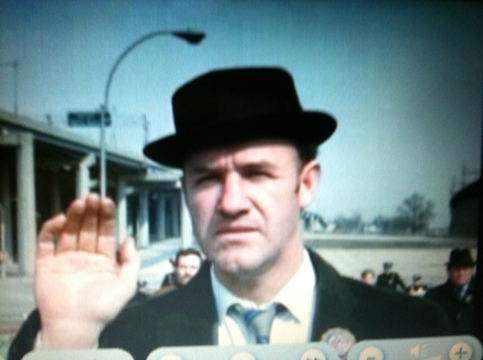 Karen informed me that this is actually Hackman’s hat, not the invention of the wardrobe dept.

Dinner, pot roast, I always get potted food on airlines, much less likely to be anything more than potted, was incongruously accompanied by a fortune cookie. The message is propitious,especially in light of my conversation in Berkeley Heights in the morning before departing for the airport. 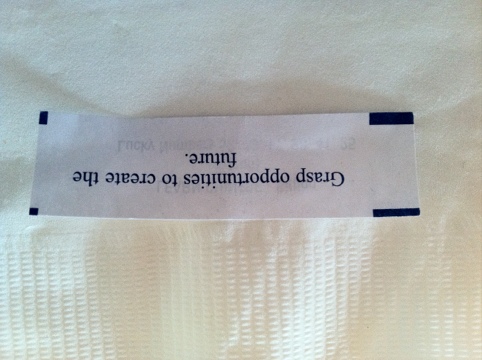 We are getting ready to leave for Hong Kong on Saturday 12/10/2011. This is our annual (almost?) trip to visit Jonathan, Nan, Jesse, and Anna. This year part of our visit will be spent in Bali. This is, after all, a vacation for Jonathan and family during their time off from the university.

Snow Is Coming Again – We Are Packed and Leaving Early

Snow has been arriving regularly all winter at about five day intervals. More snow is scheduled for Saturday morning so we are off tonight to get to Cambridge before it starts here or there. 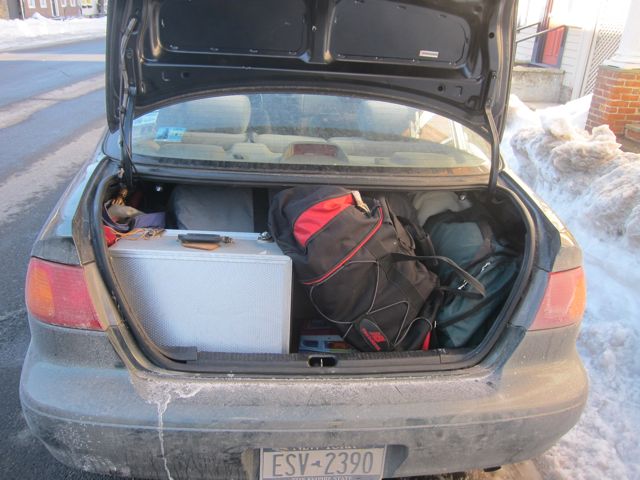 Friday 2/4: arrived in Cambridge to a winter nightmare 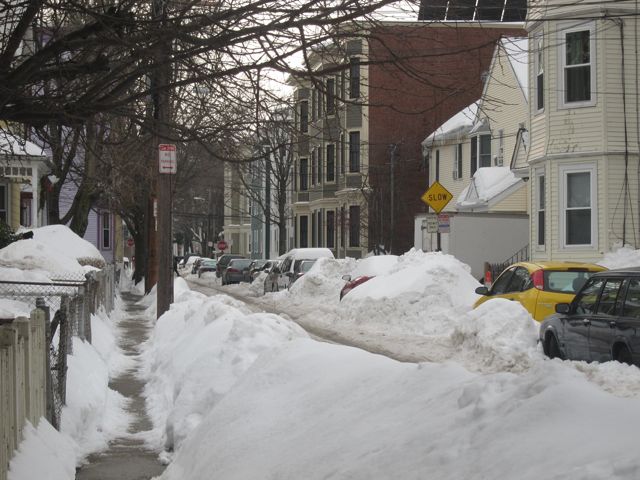 Thinking that we would avoid a Saturday snow storm we drove to Cambridge from Hudson this evening. The snow in Cambridge seems as deep as our memories of the Blizzard of ’78.

Cars are drifted over not to be moved for weeks or surrounded by wallls of shoveled snow.

Sidewalks are still not being shoveled with much thoroughness though we have heard from friends that the city is actually fining people for not shoveling. Nevertheless, unlike Hudson where the city can actually clear the streets of cars and haul all of the snow away right to the curb, Cambridge can only do this on major thoroughfares. 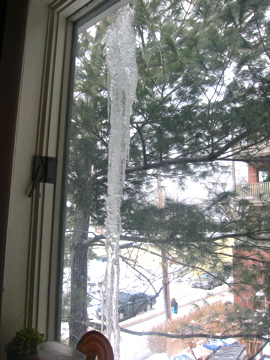 Friend Esther Hanig put us up for the night. 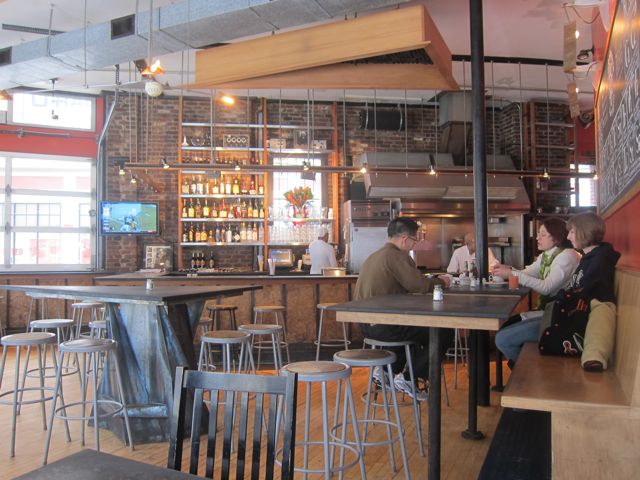 Breakfast at the Miracle of Science. Then off to Central Sq. to Radio Shack to replace our FM transmitter for the iPod. This handy little device allows us to listen to podcasts of This American Life, Wait Wait Don’t Tell Me, Studio 360, TED Radio, The Moth and more while we cruise along. Our old gizmo blew up on the way to Cambridge. Lacking this Karen and I might have to talk…….

We passed most of the afternoon at the movies. I saw The King’s Speech (I highly recommend this) and Karen saw Blue Valentine (“not an up movie, but I recommend it.”) 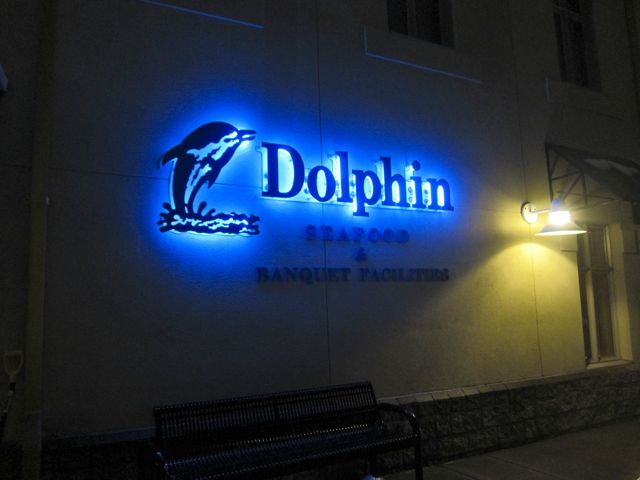 We closed out the day with dinner with friend’s Ruth and Paul at the Dolphin in Natick.

They gave us a travel gift, ever practical. 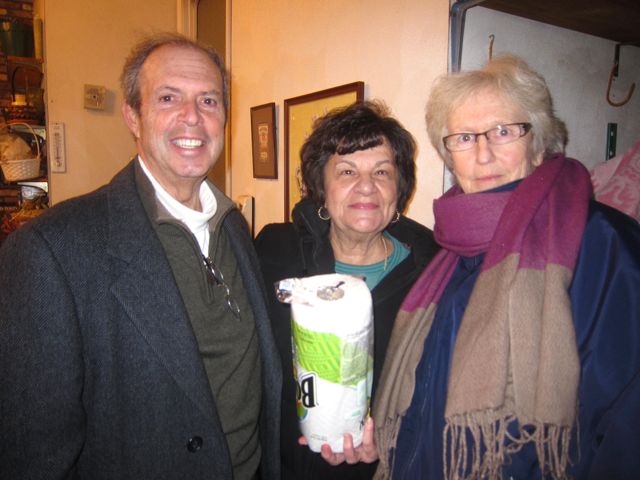 The day started with brunch at Johnny D’s in Davis Sq. Somerville with most of the usual cast of characters. 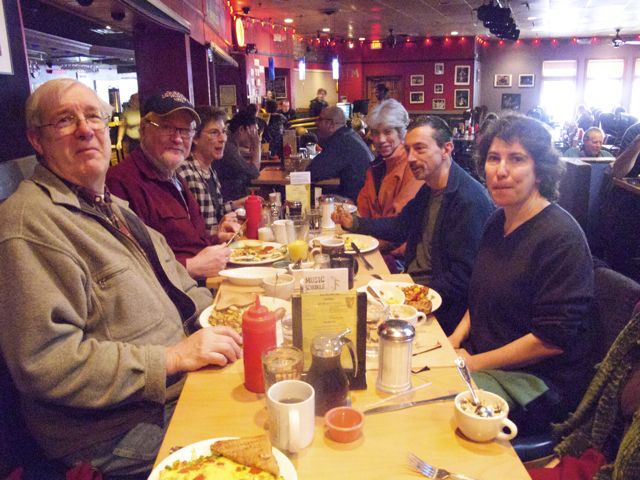 Now off to the Photographic Resource Center to see a big show by Jeff Jacobson who will be appearing in our gallery in late summer 2011. 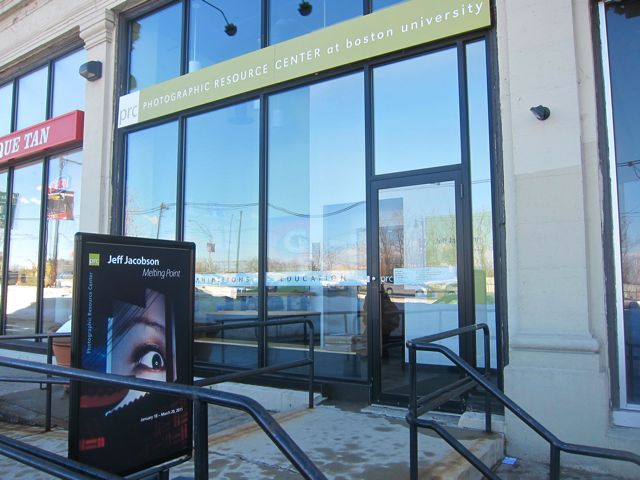 We looked for a cook stove part at REI in Boston. I was not quite sure what it said about whom. “Dog Products” lane in REI store? 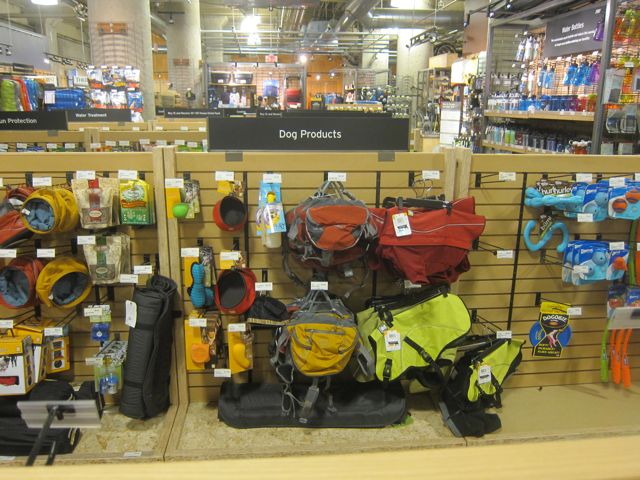 Along the way we ended up in Starbucks where our Boingo wifi account gets us to the web. Karen had to make adjustments to a Constant Contact email for the gallery. 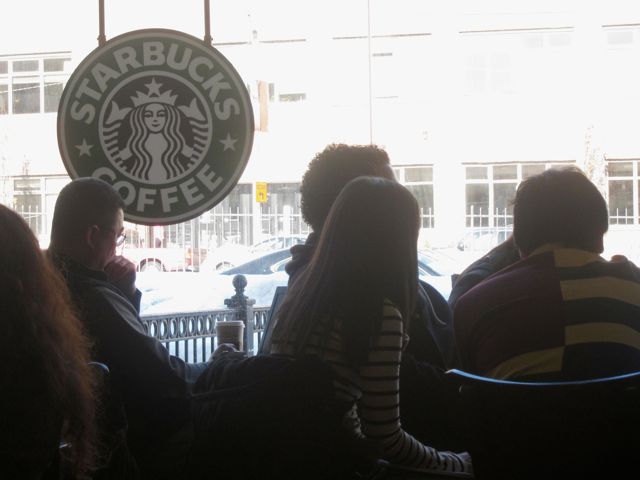 Our last culture vulture stop for the day was at the List Center at MIT for a Stan VanDerBeek retrospective. VanDerBeek is a darling of the avant garde, best known for his experimental movies, a political cultural radical and extraordinarily prescient. The exhibition is very large and at least for Mark overwhelming. 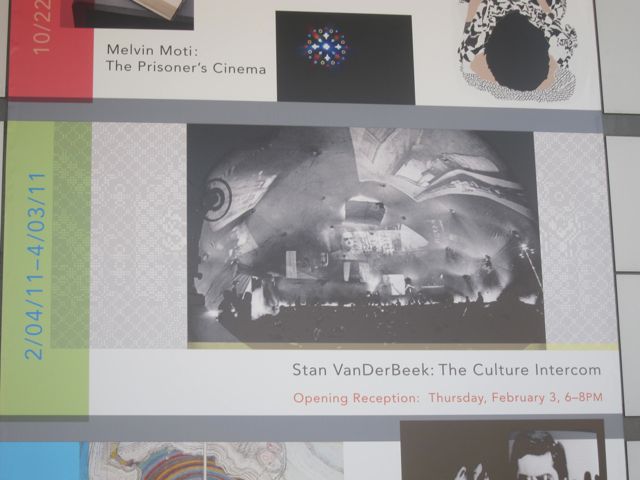 While wandering about it struck both of us again how wonderful the architecture of MIT is. This was probably roused by the great contrast with the dreadful darkness of the buildings at BU.

Here is a view of the Stata Center by Gehry. 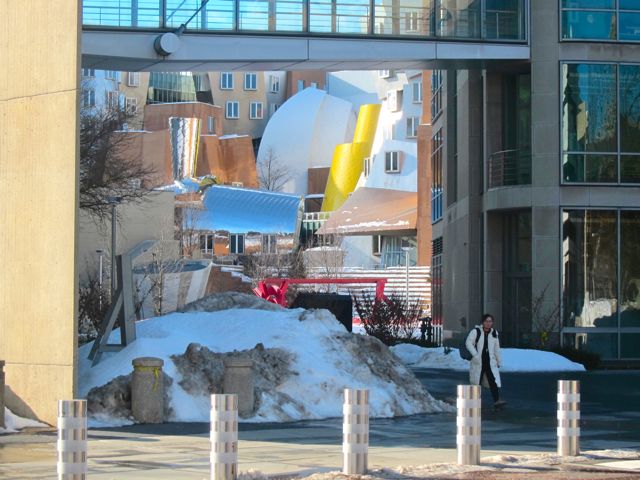 Stata Center by Gehry at MIT 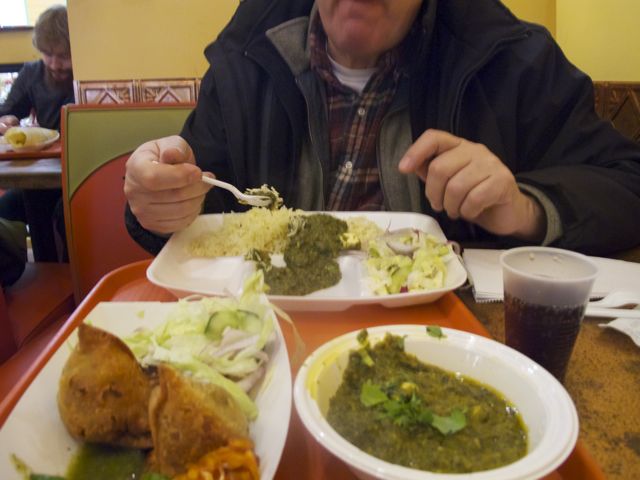 We had a quick lunch at the Dosa Factory in Central Sq. This hole in the wall at the rear of an Indian food shop serves up Indian street food.

Finally, back to Belmont to watch the Super Bowl with Bill and Nancy

Left Belmont by about 9 am. 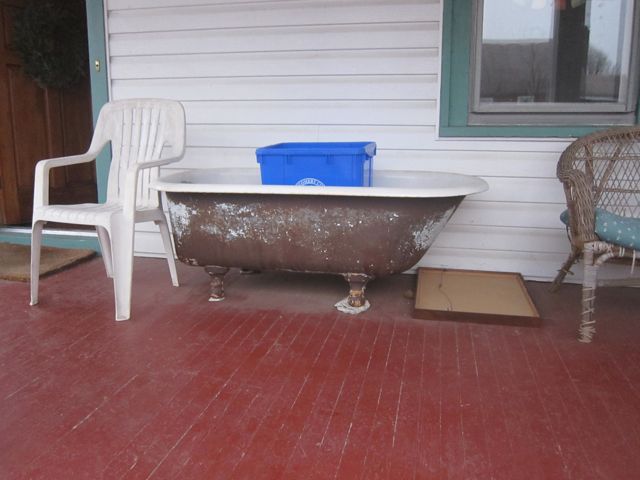 With only one major traffic snafu made it to Harvey and Betsy’s house in Silver Spring before 6pm. Wonderful dinner and much chewing the the fat (some lamb and other conversational).

Posted on February 24, 2011 by markorton
We cannot keep up with all of these postings. So, we are going to just list places and events and later fill in with pictures.

Dinner with Bob and Elissa at Pesce near DuPont Circle

With some new understanding that the length of the hypotenuse is shorter than the sum of the other two sides of a triangle, we elected to travel south along the western side of the Appalachians, this via US 81 (thanks to Betsy for suggesting this route). 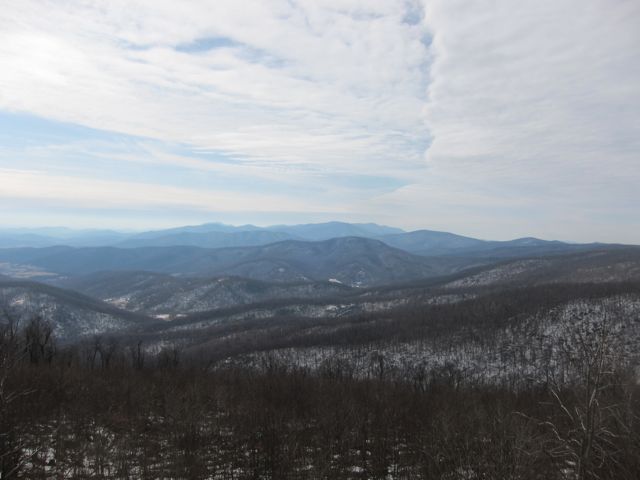 On impulse this lead us to the Skyline Drive in the Shenandoah National Park (Harvey and Betsy have biked portions of this route). 105 miles of scenic road built during the Depression by the Civilian Conservation Corp. One of the great drives in the US in the most visited National Park. However, in early February, there was virtually no one else on this road. We saw fewer than fifteen vehicles over its entire length. One benefit of the winter is that there was no leaves to block our views. We hardly had to stop at more than a few “scenic overviews” among the seventy. There are over 70 pullouts for viewing, but with no traffic we hardly had to use them to look at the vistas on both sides of the car as we traversed around the mountain tops. 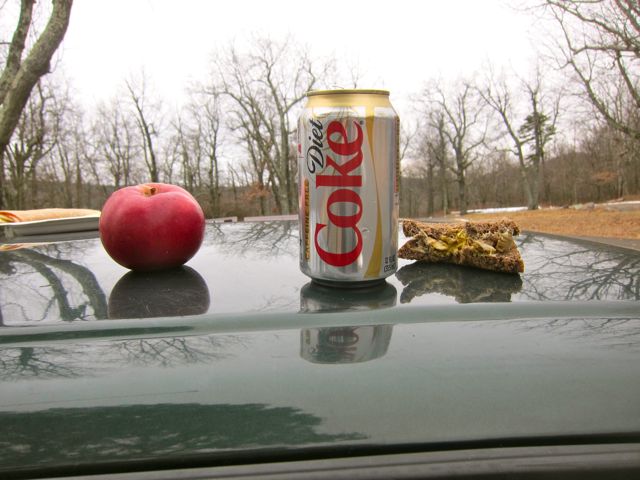 After 105 miles of scenery we were not tempted to continue on the Blue Ridge Parkway. We retreated to US 81 and continued to Knoxville, TN where we paused to rest.